How Family, Friends and Fútbol Have Shaped Jorge Guillen-Lopez ’23 On and Off the Field 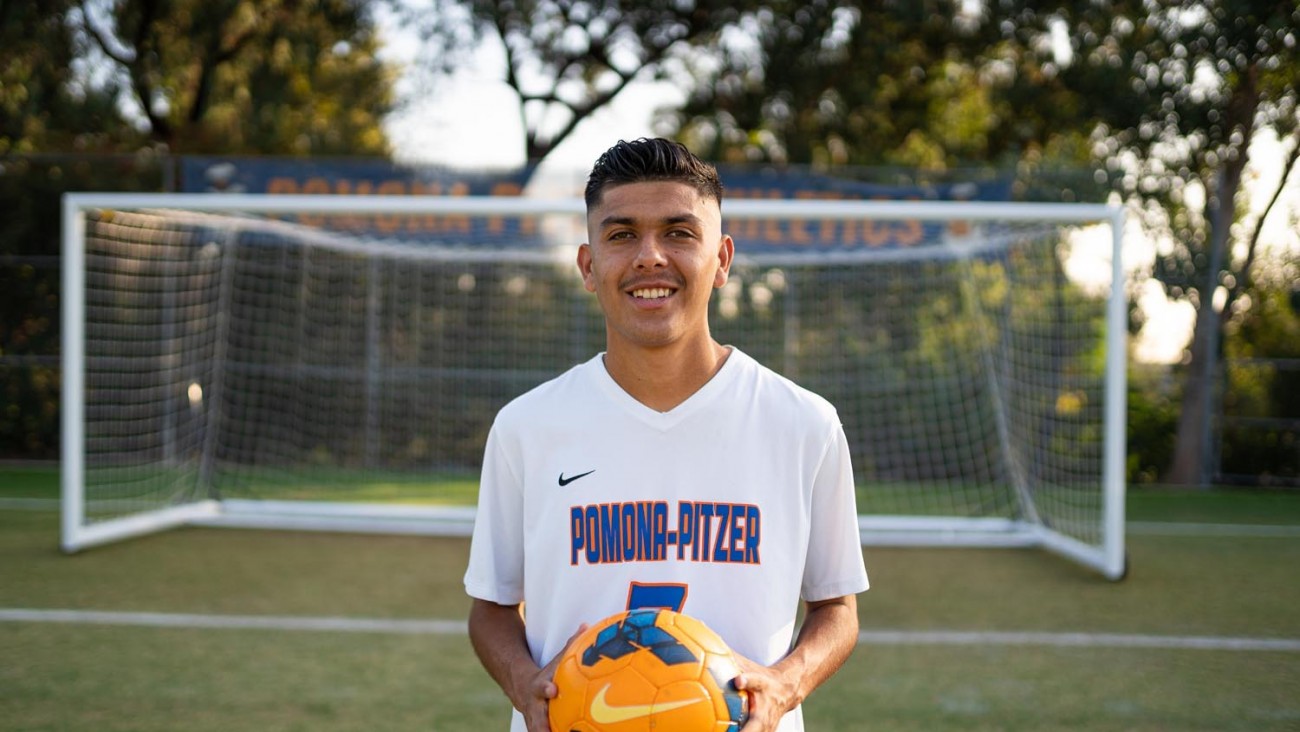 Almost every time the Pomona-Pitzer men’s soccer team played a home game, first-year student Jorge Guillen-Lopez’s family was cheering him on from the stands. Sometimes it was his aunts, uncles, cousins or friends. Other times it was his siblings and parents rooting for their youngest child – the first to attend a four-year college.

They were able to make almost every home game because they live less than six miles from campus – in a south Pomona neighborhood not too far from where Pomona College first laid roots in 1887. For his parents and siblings, the trip is a little further – an hour-long drive from Moreno Valley, a city located on the way to Riverside.

“We go to motivate him when we are able to, and I know it brings him joy when we go to his games,” his father Alfonso Guillen Zavala says in Spanish. “I’m so proud. He’s always made us so proud.”

Guillen-Lopez is now getting ready to make the trip back home for Thanksgiving next week and excited to spend it with his family at his grandmother’s house in the city of Pomona. “I’m excited for tamales and posole. Like most Mexican families, tamale season begins on Thanksgiving and goes all the way past New Years. I’m excited to eat some real homemade Mexican food.”

“I feel lucky for that because there are many people out there who can’t be with their families on this significant holiday.”

Focused on the Goal

Guillen-Lopez is very familiar with the drive from Moreno Valley. He drove in rush-hour traffic almost every day during his junior and senior year to-and-from Pomona’s Garey High School. His parents decided to move to Moreno Valley midway through his high school years, but Guillen-Lopez didn’t want to lose his academic momentum or his friends.

A straight-A student, Guillen-Lopez was working a weekend job at a Moreno Valley movie theatre to pay for his gas and personal expenses while also playing soccer for Riverside City Football Club.

“I was motivated. I wasn’t going to let my good grades and talent go to waste,” says Guillen-Lopez, who as a high school freshman saw his choices as either going to college or working in construction like his father.

“I would see him wake up at 5 a.m. to drive far and work in the middle of 100-degree summers and see him come home dead-tired,” says Guillen-Lopez of his father. “All of my uncles and my brother work in construction. It’s tough work.”

It was during his senior year of high school, when Guillen-Lopez got his big break during the final tournament of his club season. At the Surf Cup College Showcase in San Diego, during Thanksgiving weekend, Guillen-Lopez played a set of three showcase games in front of college coaches. One of them was Mike Ditta, associate head coach of Pomona-Pitzer men’s soccer, who came out to see Guillen-Lopez.

“I had heard of these schools, but I never thought I was going to apply here. No one from Garey just applies here and gets in,” Guillen-Lopez says of The Claremont Colleges.

It was Guillen-Lopez’s honesty during their initial phone call that stood out to William Swartz, Pomona-Pitzer men’s soccer coach and professor of physical education. “Being a good soccer player is just a bonus, that’s a small part of how we [faculty] would see our jobs here. We want to have good players but at the end of the day, it’s about what Pomona is offering our students.”

Guillen-Lopez came to meet with Swartz in person, bringing along his parents and older brother to meet the coach. Soon after, he applied Early Decision II and received the letter from Pomona College that he’d been working so hard for.

In his valedictorian speech on the Garey High stage, he repeated the mantra he picked up from his parents: “Hay que echarle ganas, tener orgullo en lo que haces y nunca olvides de donde vienes” which roughly translates to “Work hard and have pride in everything that you do but most importantly always remember where you come from.”

Upon arriving on the Pomona campus, Guillen-Lopez was nervous and intimidated. “No one in my family had been to college. I was living away from home and with people that I’ve never seen in my life. But my teammates are really cool, and we are always there for each other, which makes us brothers. They’re supportive, although we do compete for our spots.”

Getting adjusted to the new training regimen was tough, he admits.

“I wasn’t in the best shape of my life coming in. I didn’t think you had to work or run as much; I wasn’t as prepared as I should have been, so the first couple weeks were pretty tough for me. You have to truly be focused at every practice, sometimes practice is twice a day, and they’re intense practices. But I guess my hard work paid off: I started every game this season, and scored four goals and three assists, in 18 games,” he says.

“He’s the leading scorer on our team,” says Swartz. “Jorge leads the team in goals and assists, a credit to him. It was hard for him coming into a different regimen in training: To learn how to train at this level is hard for all freshmen because it is a more difficult than high school or club.”

Guillen-Lopez has also found a community through his courses. Enrolled in two Chicana/o-Latina/o studies courses, one taught by Professor Gilda Ochoa and the other by Professor Tomás Summers Sandoval, he has taken advantage of office hours, he’s reworked papers and asked for advice when needed.

“I’m still a little intimidated by research papers and midterms,” he admits. “Thankfully, I’ve been able to get a lot of help from my professors and my coaches and classmates. And they’ve made the transition easier for me.”